Posted at 16:01h in Press Releases by TransCore

HOUSTON–(BUSINESS WIRE)–Houston’s Metropolitan Transit Authority of Harris County (METRO) working with prime contractor TransCore commissioned the first of five reversible High Occupancy Toll (HOT) lane corridors at the recent ribbon-cutting ceremony. One of the most substantial undertakings of its kind to date in the United States, METRO’s conversion of High Occupancy Vehicle (HOV) lanes to HOT lanes will increase utilization of the HOV system and subsequently relieve congestion in the general purpose freeway lanes.

When completed, the program will span 84 miles throughout Houston, the fourth largest city in the United States and the largest city in Texas. The IH-45 South Gulf Freeway is the first corridor in METRO’s HOV network to undergo the transformation with construction of the remaining U.S. 59 South, IH-45 North, U.S. 290 and U.S. 59 North corridors to be completed by the end of 2012.

Single-occupant vehicles (SOV) will be permitted to access the HOV lanes for a variable-priced toll ranging from $1 to $4.50 based on the time of day and level of congestion. Toll amounts are posted in advance of each entrance ramp and collected through all electronic tolling (AET). SOV’s equipped with a valid toll transponder issued by METRO, or any other Texas tolling authority, are permitted to use the lanes. The HOT system is also fully interoperable with all Texas tolling authorities, allowing seamless passage on any toll facility in the State for more than 9.4 million Texas vehicles currently equipped with toll transponders.

Inbound lanes are currently accessible to SOV’s Monday through Friday from 5 a.m. to 11 a.m., except for the 7-8 a.m. peak hour when the lanes are HOV-only. Outbound lanes are available to SOV’s weekdays from 1 p.m. to 8 p.m., except for the 4 p.m. to 6 p.m. peak HOV-only timeframe. The HOT lanes will now be reversed from the inbound to outbound direction using a new automated reversible gate operation (ARGO) system that was deployed as part of the conversion effort. The ARGO system is an industry first-of-its-kind and size, allowing METRO to remotely monitor and efficiently control access and egress throughout the entire HOT network from the area’s multi-agency traffic management center, Houston TranStar.

“METRO and TransCore share a common vision to improve mobility for the commuting public through the use of technology,” noted Whitt Hall, vice president and southern region managing director for TransCore. “A project as challenging and innovative as METRO’s showcases both TransCore’s leadership deploying HOT lanes and our commitment to implement industry-leading concepts for our customers.”

In addition to serving as the prime contractor for the system design and installation of the HOT and ARGO systems, TransCore is also contracted to provide turnkey lane, roadway, and back office operation and maintenance services for the two systems over the next six years. Overall, METRO’s HOV to HOT conversion encompasses 108 toll lanes, a storefront and customer service center, back-office systems, and more than 100 dynamic message signs (DMS), 200 closed circuit television (CCTV) cameras, 200 vertical and swing gates, 7 vertical restraining barriers, and numerous other traffic control devices, all fully integrated and centrally controlled from Houston TranStar.

The HOT system is all-electronic, complete with an automatic violation enforcement system and customized HOV occupancy enforcement solution. Tolls can be calculated and collected using either dynamic or time-of-day pricing. The program will incorporate TransCore’s radio frequency identification (RFID) eGo Plus windshield sticker tag and Encompass 6 reader that are interoperable with all tolling agencies throughout the state of Texas.

TransCore has been a system integrator, operator, and maintenance provider for some of Houston’s largest transportation initiatives for more than 20 years. Nationally, TransCore has supported HOT lane deployments for the nation’s first HOT installation on I-15 in San Diego as well as Miami’s I-95 Express, Seattle’s SR 167, and Utah’s I-15 in Salt Lake City.

METRO is an innovative regional transportation organization of dedicated employees committed to partnering with the public and private sectors to provide the safest, highest quality services and mobility solutions that exceed customers’ expectations while creating economic growth.

TransCore’s 75-year heritage supporting the transportation industry spans the development of RFID technology at Los Alamos National Labs to implementation of the nation’s first electronic toll collection system. With installations in 46 countries, more than 100 patents and pioneering applications of RFID technology, TransCore’s technical expertise is unparalleled in the markets it serves. In 2011, Engineering News-Record (ENR) ranked TransCore No. 154 out of the Top 500 Design Firms. TransCore is a U.S. owned and operated company with products designed, engineered and manufactured in the United States. 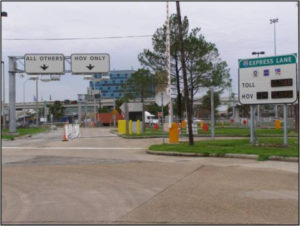